The grownups are freaking out. Something called a Presidential Election is happening out in the world. All the grownups want to cry, they are having meetings and pacing around, wringing their hands with twisted worried faces.
Evil men out there are going to start something called “World War 3”.  If the one called “Ronald Reagan” becomes “The President”.
I’m so scared, we’re all going to die. Why? Why do these men want to kill us? In my secret place in the bushes by our bus I pray and wish and wish and pray that the bad man, Ronald Reagan, does not become The President so no one gets hurt and we can all live. I love our bus and everything around it and don’t want it to blow up into nothing. It doesn’t make sense, it’s not okay to hurt people and everything is so nice and pretty; the animals, the trees, the moss, the sky, the plants -how could anyone destroy nice things for no reason? I pray pray pray the grown ups can stop these bad men.
They are going to do something called voting. If enough people vote for the good man, he will be The President and the bad man won’t be and won’t kill everyone. The president is the ruler of all the ignorant people called “squares” out there who don’t live here. The grownups are very worried because all the square people out there are not smart and might vote for the bad man. They have to go out there and vote for the good man and make sure he wins. Squares are a shape like a box. Why are they called squares? What does it feels like to be a square person instead of a normal person? They don’t look like squares, they look like human shapes – are squares their favorite shape or can their flesh morph and squish into the shape of a square or do grownups just call them that for some silly reason? Sometimes grownups are silly and don’t make sense.
I am 4 and don’t understand it all but I understand it’s very serious, the most serious thing that’s ever happened. We are barely balancing on the edge of a world wide planetary fiery explosion if Ronald Reagan becomes President. After they vote, if he wins, he will click a button that blows up the world and everyone and thing- BOOM, we’re all gone, we’re all dead.
Killing people is very, very bad. Guns are evil little things that kill people, and bombs are way worse than guns. We are not allowed to play guns. If any kid is caught pretending a stick is a gun or if they hold their finger like a gun, they get in huge trouble. Really huge trouble. They get screamed at, spanked, stashed and viewed as a terrible person for a while. That’s how bad guns are. I can’t believe how brave some of the boys are to play guns outside and wonder what it would feel like to hold my fingers like that. I can imagine how naughty and good it would feel to stretch my fingers into that position and point them at something and pretend some kind of power is shooting out of my finger…but it would probably not be worth how bad my butt would feel from a spanking, so I just stare in awe at the boys who pretend their hand is a gun. I don’t tell on them because I don’t want them to get spanked. They aren’t actually hurting anyone with their fingers, they are just pretending and playing. Why does it make the grownups so mad even though it’s not even real? Could their fingers magically become real if they pretended hard enough? The look on their faces seems so careless and unafraid when they’re doing it, even though any random grownup coming from any direction could see them and it would be all over. Fury from the grownups would rain down upon them, I cannot believe the incredible risk they take.
I ask my mom why anyone would have war and hurt people they don’t even know. She says some people don’t like other people because of the color of their skin. Like if they have a different color. I don’t believe it. That can’t be real. That’s not possible. It’s just not humanly, physically possible in any way. It’s totally impossible and there’s no way that can even be a thing at all. I cannot even fathom how anyone could even come up with such a wildly impossible idea, much less implement that wildly impossible idea. It’s the most impossible thing I’ve ever heard of. Even if there was another reality, like in some dark tunnel outside of this reality, where impossible was possible, it couldn’t even be possible there. Because no matter what color someone’s skin is, they are still a person, just like you, so it would be impossible to not like them just because they had different color. There’s just no way that could be. But my mom says it really is true. I stare off through the trees… somewhere out there is an extremely strange world with extremely bizarre people that make no sense at all.

After a while, after the vote, our worst nightmare comes true! Ronald Reagan does win, he does become The President. It’s time to die.
But miraculously, we don’t blow up. And the grownups just go on acting like everything is pretty much normal again, acting like they never acted like we would all be blown up if Ronald Reagan became The President.
But they all get cartoon t-shirts. I play outside our bus watching the big tall men stomp by in their cartoon shirts. The bad men are on their shirts, their cartoon shirts that say “TAKE THE TOYS FROM THE BOYS”. Do these men want to take toys from boys? That’s mean. I keep observing the grownups and their weird shirts so many of them wear now. The 2 giant cartoon men are sinister, ugly and laughing and they have a big black bomb they want to light. One of them is Ronald Reagan. I finally get it, the bombs are their toys, even though it’s not a toy, it’s a bomb. And they are the “boys”, even though they are not really boys, they are men… They are bad men and they are real, not just cartoon shirts, they live out there and wear dark suits, and want to blow up the world and kill everyone with their bombs. That’s why we need to take away their bomb toys. But if the evil square guys want to blow everything up, and they have those bombs, why haven’t they? Why hasn’t Ronald Reagan blown up the world already? 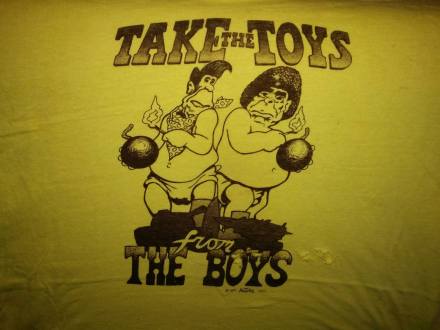 Thanks to Patty Ibur for pic of shirt she pulled out of chest. It’s almost like I remember! I wrote the story before seeing this image I hadn’t seen in decades, so it’s not perfectly accurate but the description of the impression it made on my child mind, is. lol

© Unauthorized use and/or duplication of this material without express and written permission from this site’s author and/or owner is strictly prohibited. Excerpts and links may be used, provided that full and clear credit is given to Celeste and HippyCommune.wordpress.com with appropriate and specific direction to the original content. Photos credited to Daniel Luna, Gerald Wheeler, Mary Flanery unless credited otherwise.